The number of wide-body aircraft arriving at Vilnius Airport is growing rapidly. Compared to 2019, which was a record year for aviation, this year’s total number of flights is around a quarter higher. It is expected that the traffic of these aircraft will continue to increase in the coming period, and the reconstruction of the Vilnius Airport aerodrome, which is being completed at the end of this year, will make it more convenient to serve these aircraft.

Wide-body aircraft are a type of aircraft with a wingspan of around 40-60 metres and the technical capability to carry large loads or passengers over long distances, which is much wider than that of conventional aircraft. For example, a wide-body aircraft can carry cargo weighing around 70-140 tonnes, while the number of passengers on board can exceed 300. These aircraft often operate long-distance flights, for example from Europe to the United States. Vilnius Airport is ready to handle such planes - its infrastructure (runway, taxiways, and aprons) allows for successful operations.

According to Dainius Čiuplys, Director of the Operations and Infrastructure Department of Lithuanian Airports, servicing wide-body aircraft is a complex process that requires adequate human and infrastructure resources.

“A visit by this type of aircraft is an important assessment of the airport and its technological capabilities, but on the other hand, it is also a significant responsibility. As you know, in order to be able to service these aircraft efficiently and effectively, we need to offer them the appropriate infrastructure. For example, apron parking areas that are larger than those for normal passenger transport, or an appropriate security category and greater fire-fighting capacity,” says D. Čiuplys.

According to D. Čiuplys, although Vilnius Airport has been witnessing a consistent increase in the number of larger aircraft over the past years, this year’s growth is a record.

‘Although this year is not yet over, we can already see that we are well ahead of 2019, which was considered a record year in many areas. For example, in 2021, an Airbus A310 made 70 landings at the capital’s air gate, compared to 20 the previous year. We have also received aircraft that have never been serviced at Vilnius Airport before, including the Airbus A350-900 that recently flew the Taiwanese delegation,” he says.

It is estimated that almost 300 wide-body aircraft have landed and taken off at the capital’s airport this year, and by the end of the year, the number will undoubtedly surpass three hundred, compared to 231 in 2019.

According to a representative of Lithuanian Airports, the cargo handling infrastructure at Vilnius Airport is currently being expanded. Construction of a new DHL express terminal has started this month at the airport, and there is no doubt that the project, developed by private business, will contribute to the improvement of the airport’s cargo handling infrastructure and will allow for a steady increase in the number of visits by larger cargo aircraft in future.

“There is no doubt that the reconstruction of the aerodrome will make the movement of wide-body aircraft on the apron even more efficient. Then we will be able to react even more flexibly to changes in the planning of apron operations, changes in aircraft schedules, as well as to solve the shortage of parking areas, which has been a significant challenge in accommodating larger aircraft,” says D. Čiuplys.

It should be mentioned that Vilnius Airport is currently undergoing the largest reconstruction in the country’s aviation history. The value of the works amounts to €36 million (excluding VAT), with the largest part of the investment €14,1 million for the reconstruction and extension of the northern apron. The existing apron has been enlarged by 8 aircraft parking spaces, including 5 additional parking spaces for large aircraft. New taxiways were reconstructed and installed at the aerodrome, as well as the runway surfaces were modified and widened to allow for the taxiing of larger categories of air transport. 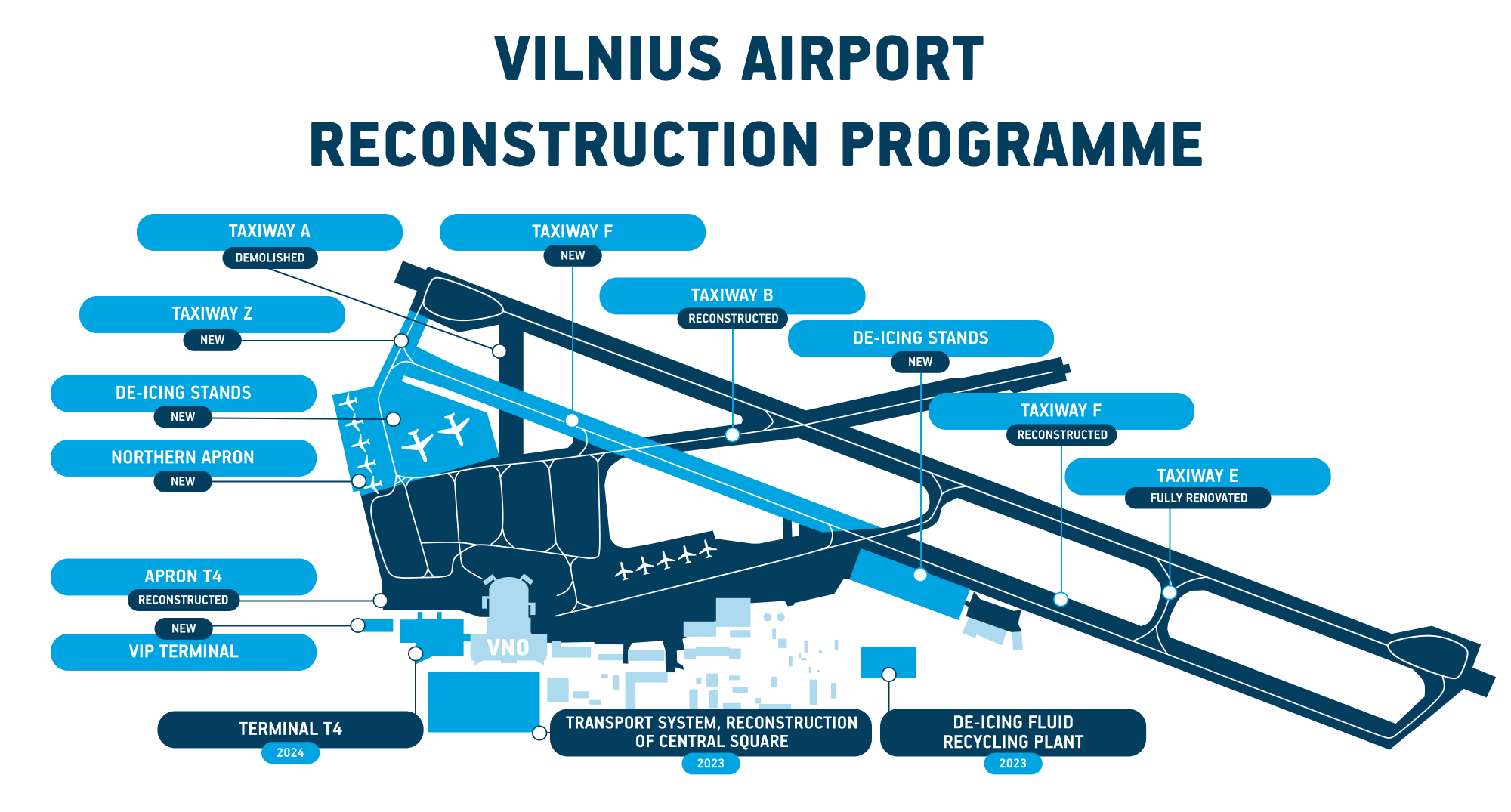